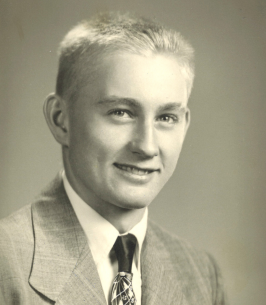 Donald L. Steele, age 88 of Joplin, Missouri, passed away peacefully on Monday, September 19, 2022, at his home. Don was born on March 24th, 1934, in Joplin, Missouri, the son of Floyd Sr. and Mary Alice Cavener Steele. He moved with his family to Baxter Springs, Kansas at the age of 3 where he attended Baxter Springs schools until his graduation in 1952. After graduation, his father employed him for one year at Abernathy Lumber Yard. After being refused a raise by his father, he decided to accept a football scholarship to Joplin Junior College. During his time at the college, he played football and basketball and was active in the Student Senate and the college’s journal publication. After graduation, he was employed by Yellow Transit Freight Lines, beginning what was to be a forty-year career in the trucking industry. In 1956 he was drafted into the U.S. Army and served his country as a Finance & Accounting Clerk in Post Medical Supply in Ft. Leonardwood, Missouri. Don was honorably discharged in 1959 and served for six more years in the reserve. On return to civilian life, he married Nancy Faulkner in Baxter Springs, Kansas in 1960 and his employment with Yellow Transit Freight Lines resumed. His career took him to several regions where he lived and worked, including Springfield, MO; Ft. Wayne, IN; Louisville, KY; Seattle, WA; Tulsa, OK; Little Rock, AR; and Dallas, TX. In 1985, he was transferred back to Baxter Springs where he retired in 1995 as a Management Executive, managing several terminals for Yellow Transit Freight Lines.

Don was an avid golfer and was a former member of Loma Linda Country Club and Twin Hills Country Club. He was a lifelong fan of the St. Louis Cardinals. He was also on the Board of Directors of the Baxter State Bank and Baxter Bancshares. He was a Kentucky Colonel, an honor given by the Governor of Kentucky for outstanding service to the State’s Commonwealth. He loved to travel with his wife, and enjoyed seeing almost all of the states in the U.S.

While a member of Christ Community United Methodist Church, he served as Treasurer for several years. He and his wife Nancy started a senior program, Senior Saints, which is still active. They also delivered meals on wheels for several years in the Joplin area. Always active in church groups, Don and Nancy served the lord and made many wonderful friends. Don loved playing cards and dominos and watching his grandchildren in every game and sport they played. One of his greatest joys in his life was the time he was able to share with his family.

He is survived by his wife of 62 years, and his three children: Shelley Fewel and husband Steve, Muskogee, OK. David Steele, Webb City, MO, and Sarah Storrs and husband Brad, Seneca, MO.

A private graveside service with military honors will be held for the family at Ozark Memorial Cemetery. Funeral services will be held at Park Plaza Christian Church, Joplin on Thursday, September 22nd at 11 AM, Mark Scott officiating.