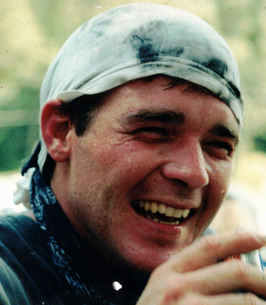 Kyle Anthony Robertson, age 48, of Springfield, Mo, formerly of Joplin, passed from this life on Tuesday, August 2, 2022, at Cox South in Springfield surrounded by his friends and family.

Kyle was born on October 14, 1973, in Joplin the son of Becky Francisco and the late Gregg Robertson. He has been a lifelong area resident. He married Debbie Malcolm in 1996 and together they were blessed with four daughters who were the light of his life.

He worked as a project manager for Cardoza Construction. He attended James River Church in Springfield, MO. He enjoyed fishing, smothering his children and grandchildren with love and affection, and playing darts, participating in many competitive tournaments with his friends.

A memorial visitation will be held at 2:00 p.m. Saturday at Mason-Woodard Chapel. Memorial contributions may be given to the Ronald McDonald House or the Children’s Miracle Network.

Arrangements are under the direction of Mason-Woodard Mortuary & Crematory.