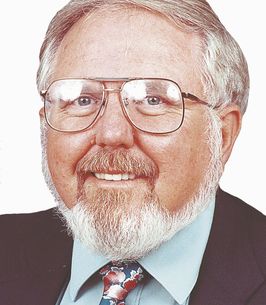 He was born June 10, 1940, to Grace and Clair Goodwin Sr. and lived as a child
in East Town. He attended Joplin Junior College and Pittsburg (Kansas)
State Teachers College.

He married Cynthia Harrison on Dec. 22, 1963.
Goodwin was a longtime Joplin Globe editor and columnist who began
working for the paper in 1958 in the Sports Department for Wendell
Redden. He became assistant sports editor in 1962. Two years later he
began covering news for the paper. He also worked for the Joplin News Herald,
the afternoon paper, and served as the sports editor and editor of its editorial page.
He was named news editor of the News Herald in 1969 and served as
editor-in-chief of that paper until it ceased publication in 1970.
He then transferred to city editor for the Globe.

Goodwin began writing for the Globe's editorial page in 1972 and was
named assistant editorial page editor in 1975. He was named editorial
page editor in 1991. He was recognized many times by the Missouri Press Association
and other organizations for his editorials and columns, and in 1997 the Globe
received the William Allen White Editorial Excellence Award from the
Inland Press Association.

Goodwin retired from the Globe full time in 2006, but remained on a
part-time basis through 2008. He also wrote a popular golf column,
"Chip Shots" for nearly half a century.
Goodwin was an authority on both the local and national golf scenes. He
helped revive interest in the Joplin Horton Smith matches and was a
driving force behind the Horton Smith and Ky Laffoon teams. He also
covered numerous PGA Championships, men's and women's U.S. Opens, Ryder
Cup matches and more, and met or interviewed many of the top names in golf.
He served as director of the Joplin Globe city championship for many
years, and was a founding member and past president of the Joplin Golf
Foundation. In 1990, he was inducted into the Joplin Golf Hall of Fame
and was later inducted into the Ozarks Golf Hall of Fame.
He also was a past chairman of the board for the Joplin Historical & Mineral Museum.

Goodwin was a longtime member of Southside Baptist Church in Joplin.
Survivors include his wife, of the home; two children, Mike and Wilma
Goodwin, in Texas; and Kathy (Goodwin) and Todd Carter, also of Texas;
and seven grandchildren, Mykayla Goodwin, Sawyer Goodwin, Spencer
Goodwin, Alex Goodwin, Brett Carter, Alexa Wetherell and Gabby Whalen.
He is also survived by six great-grandchildren; one great-grandchild
preceded him in death.