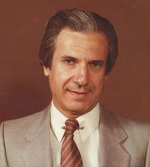 Dr. Hish Majzoub, 87, of Joplin, MO transcended to heaven on May 3, 2022. Born in 1934 in Beirut, Lebanon, Dr. Majzoub grew up with his sister and brother exploring the cedar trees and coastline in the middle east. He enjoyed reading and spoke three different languages at an early age and excelled in school with an interest in math and the biologic sciences.

He attended college and medical school at the American University in Beirut graduating Alpha Omega Alpha in 1959. Following graduation from medical school he spent a year as a rotating intern at the American University hospital in Beirut before immigrating to the United States in 1960. As a resident at the University of Kansas medical center he met his wife Barbara, a nurse at the medical center. He completed his neurosurgical residency at University of West Virginia medical center where he remained on staff as a junior professor. During that time Hish and Barbara were blessed with three boys. The family moved to Joplin, MO in 1974 and Hish established a practice specializing in central neurological disorders, tumor and trauma surgery. He enjoyed the hot weather in Missouri which enable him to pursue his love of nature: planting trees, spending time in the garden and outdoor grilling. His true passion was working with his hands caring for neurosurgical patients with the goal of curing diseases and healing the sick. Later in life he enjoyed traveling abroad, learning about different cultures and reminiscing in the fine arts. Dr. Majzoub practiced neurosurgery in Joplin for 41 years ultimately retiring in 2015.

Dr. Majzoub was an active member of the American Neurological Board, American Association of Neurological Surgeons, and American College of Surgeons. Dr. Majzoub will be greatly missed by his medical colleagues, friends and family.

He was preceded in death by his sister May Jaber. He is survived by the love of his life of 60 years, Barbara, sons Jeff (and wife Patty) of Joplin, MO, Kevin of Louisville, KY and Eric (and wife Jenna) of St Louis, MO and brother Hussni (and wife Salama) of Beirut, Lebanon.

In lieu of flowers the family requests donations be made to Mercy Hospital, Freeman Hospital, or St. Philip’s Episcopal Church.

A funeral mass will be held at 10:00 am on Monday May 9th 2022 at St. Philip’s Episcopal Church. Burial will follow at Mount Hope Cemetery. Visitation will be held at 3 pm Sunday May 8th 2022 at Mason-Woodard Mortuary.