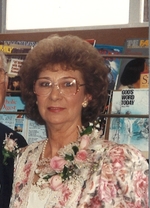 Mary Lou (Parnell) Teeter, age 96 of Joplin, Mo, passed away on April 29, 2022 after living an exceedingly full life. Mary Lou was born in Mineral Heights, OK on October 30, 1925 to Neva (Parnell) Wakefield. She was a lifetime resident of the Joplin area.

On May 2, 1942, Mary was united in marriage to the love of her life, Charles A. Teeter. Together, they founded the Joplin Fire Protection Company in 1957. Because of their hard work and dedication, it became one of the largest fire protection companies in the United States. They enjoyed raising their family and traveling. They were proud of the life they built together.

Mary Lou was a family woman, and a woman of God. She was a member of St. Mary’s Catholic Church. She was also a member of the Alter Society and the Lady Elks Club.

A Funeral Mass will be held at 10:00 am on Saturday, May 7, 2022 at St. Mary’s Catholic Church, with Father Joe Weidenbenner officiating. Burial will follow at Ozark Memorial Park Cemetery. A Prayer Service will be held at 6:00 pm Friday, at the Mason-Woodard Chapel with a visitation to follow.

Arrangements are under the direction of Mason-Woodard Mortuary.