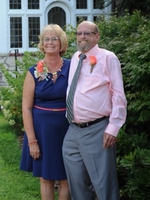 Dale Wayne McMullen passed away on April 15, 2022 at the age of 65, in his hometown of Joplin MO. His battle with serious medical issues in recent years showed his courage in facing life challenges with a smile. For everyone who truly knew Dale, he could get a little bit excited. This is where we all laugh and say, “I remember when Dale……”. Despite the pain, he came out a hero and stayed incredibly strong until the end.

Dale is survived by his wife, Kim McMullen; Sons, Jeremy and Justin McMullen; Daughter-n-law’s, Sarah and Brook McMullen; Grandson’s, Dylan and Tucker McMullen; Stepfather, Marvin Cicero; his Sister, Karen Eddis; Step brothers; Craig, John and Rob Cicero; Step sister, Tresa Young and the countless friends he has touched over the years. Dale is proceeded in death by his Father; Gaylen McMullen; and his mother, Pat Cicero.

Dale met the love of his life, Kim, while dragging main street in his bronze Super Bee. If you were to have called his car “Gold” instead of bronze, you would hear about it. He was so proud of that car and his hair, and it evidently worked. It was love at first sight. Dale and Kim married July 1, 1978. Together they were an unstoppable team. They supported each other every step of the way. Dale and Kim have been together 46 years and married 43 years.

Dale had two main hobbies, fishing and hunting. He was the happiest when fishing with his grandson Dylan and hunting with his two sons Jeremy and Justin. Oh, and we can’t forget about his Nascar. He looked forward to his weekends of racing.

The family will receive friends during a celebration of life held from 6:00 to 8:00 p.m. Thursday evening, April 21, 2022 at Mason-Woodard Mortuary.