Obituary for Off. Jake Alexander Reed 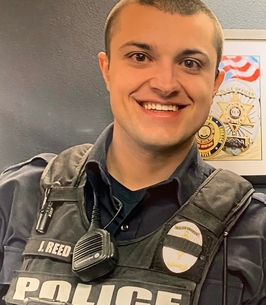 It is with a heavy heart we tell you of the passing of our beloved husband, son, and brother, Jake Alexander Reed on March 9, 2022. Jake was injured in the line of duty on Tuesday March 8, 2022. He gave the ultimate sacrifice for his city through his service as a Joplin Police Officer. His heroism continues as he spreads the gift of life to several recipients as a vital organ donor. End of Watch March 11, 2022.

Jake was born on December 9, 1994, in Pleasanton, California, the son of Robert and Melissa (Burelli) Reed. He grew up in Bentonville, Arkansas and graduated from Bentonville High School in 2013. Jake was a gifted athlete who played baseball all four years of high school. He graduated with Honors from MSSU with a Bachelor of Science Criminal Justice Administration and Associate of Science Law Enforcement degree in 2017. He was also a member of Kappa Alpha Order. He became a Joplin Police Officer following graduation.

Jake had an adventurous spirit with a great amount of confidence in all that he attempted to do. He was undoubtedly skilled in computer assembly and technology. He loved ‘gaming’ of all types. He enjoyed mountain biking, golfing, and wakeboarding. He had a fierce love for all animals, especially his dogs.

Jake had an infectious smile. He treated everyone with kindness and respect. He was a great person, a genuinely awesome guy.

He met and married the love of his life Bayley Strella. They were married on May 8, 2021, at White Rock Mountain in Arkansas. In addition to his wife, Jake is survived by his parents Robert and Melissa Reed, Bella Vista, Arkansas; his brother, Sam Reed, Arvada, Colorado; his mother and father-in-law, Rod and Kelly Strella, Joplin, Missouri; his sister and brother-in-law, Paige and Aaron Bittle, Neosho, Missouri; and his nephew, Brooks Bittle.

In lieu of flowers Memorial Contributions may be given to the Oklahoma German Shepherd Rescue Inc. or the fund of Joplin Fraternal Order of Police Officer Jake Reed in care of the mortuary.