To share your memory on the wall of Evelyn Cook, sign in using one of the following options:

Louise was a homemaker for her three children and later obtained a Nurse Aid Certificate. Louise also spent many years working for the Eastern Shawnee Tribe before her retirement. Louise was known for her kind heart and driving need to help others. She was a member of Saint Paul’s United Methodist Church and her faith was strong to the very end. She spent many of her days adoring her children and grandchildren, and never feared to offer advice when the need arose.

Louise spent her early years competing in canoeing and won the Oklahoma State Championship in the late 70’s. She was also skilled in gardening, crocheting, and canning. Her homemade sweet relish and salsa was favored by friends and family. Later in life, she would find a passion in prospecting and camping with her husband in Arizona. Louise was also a worldwide traveler and never let an adventure pass her by.

To send flowers to the family or plant a tree in memory of Evelyn Louise Cook, please visit our Heartfelt Sympathies Store.

There are no events scheduled. You can still show your support by sending flowers directly to the family, or planting a memorial tree in memory of Evelyn Louise Cook.
Visit the Heartfelt Sympathies Store

We encourage you to share your most beloved memories of Evelyn here, so that the family and other loved ones can always see it. You can upload cherished photographs, or share your favorite stories, and can even comment on those shared by others.

Posted May 16, 2021 at 10:52pm
Louise was a very sweet lady. She will be greatly missed. I worked with her at the casino for many years. Always had a heart of gold. It just broke my heart to see this.
Comment Share
Share via:
HS

Flowers were purchased for the family of Evelyn Cook. Send Flowers 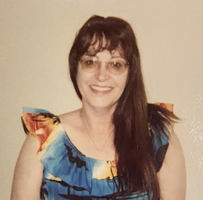