To share your memory on the wall of Joanna Crouch, sign in using one of the following options:

Joanna was born on April 5, 1929 in Galena, KS, the daughter of the lat... Read More
Joanna Gayle Crouch, age 92, formerly of Joplin, passed away on Monday April 19, 2021 at Canoe Brook Assisted Living in Catoosa, OK, following a long-fulfilled life.

Joanna was born on April 5, 1929 in Galena, KS, the daughter of the late Frank Edgar Walters and Sophia Kizziar (Wisdom) Walters. She was born in Galena, Kansas and lived most of her adult life in Joplin, Missouri. She married John Edward Crouch on December 31, 1947 at First Baptist Church in Duenweg, Missouri and they were blessed with two sons. She was a devoted wife, mother, grandmother, great-grandmother, and great-great-grandmother. She was a past member of Forest Park Baptist Church. She worked a few years as the cafeteria manager at East Junior High School.

Graveside services will be at 1:00 p.m. Wednesday at Stone Cemetery near Diamond, MO. Randy Wilson, Minister will officiate.

To send flowers to the family or plant a tree in memory of Joanna Gayle Crouch (Walters), please visit our Heartfelt Sympathies Store.

We encourage you to share your most beloved memories of Joanna here, so that the family and other loved ones can always see it. You can upload cherished photographs, or share your favorite stories, and can even comment on those shared by others. 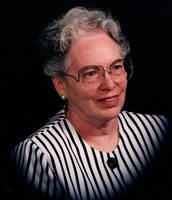