To share your memory on the wall of Gene Powers, sign in using one of the following options:

Print
Gene Powers, age 95, passed away peacefully from natural causes March 5, 2021 at a hospital in Springfield, Mo., with his family by his side.

Born Grover Eugene Powers on June 13, 1925 in Joplin, Mo., to the late Grover and Lena (Johnsto... Read More
Gene Powers, age 95, passed away peacefully from natural causes March 5, 2021 at a hospital in Springfield, Mo., with his family by his side.

Born Grover Eugene Powers on June 13, 1925 in Joplin, Mo., to the late Grover and Lena (Johnston) Powers. Gene served in the United States Army during WWII. He was a part of the Combat Engineers. On January 16, 1946, Gene was united in marriage to the love of his life, Pauline Hoke. Together they had five children. Gene was a family man. He was patient and kind. He would break out in song and sing gospel music to his children. He was proud of his children and loved being grandpa to his eight grandchildren and 14 great grandchildren.

Gene was a founding member of Reinmiller Baptist Church where he also served as a deacon and elder. He loved his church. Gene loved working with his hands. He enjoyed gardening, bowling, and golfing. He was a “fix it all” man. He was very resourceful and would help anyone who needed it. He will be missed by all who were blessed to know him.

Funeral services have been planned for 2:00 p.m. Thursday, March 11, 2021 at Mason-Woodard Chapel in Joplin, Mo. Burial will follow at Saginaw Cemetery in Saginaw, Mo.

To send flowers to the family or plant a tree in memory of Gene Powers, please visit our Heartfelt Sympathies Store.

We encourage you to share your most beloved memories of Gene Powers here, so that the family and other loved ones can always see it. You can upload cherished photographs, or share your favorite stories, and can even comment on those shared by others.

Quinn and Laura Kupish, From: Kenneth Powers Family....Cynthia, Linda, Mi, and other have sent flowers to the family of Gene Powers.
Show you care by sending flowers

Posted Mar 11, 2021 at 03:14pm
I met with Gene a few years ago while working with him on an insurance claim for his church. I have known his kids for many years and know that he is very proud of his family, children and grandchildren. He was a very kind and thoughtful man and I always enjoyed talking to him whenever I had the opportunity. He lives in my neighborhood and when I drove by, I could see him outside working in his yard. He took exceptionally good care of his property and could tell he was particular when it came to neatness. In our conversations, I could tell he was a Godly man and loved helping the church. May God's Holy Spirit give comfort and peace to his family.
Ken and Kathie Comer
Joplin, MO
Comment Share
Share via:

Posted Mar 11, 2021 at 01:10pm
I'm sorry to hear of Gene's passing. Many years ago, in the '60's my dad, Byron Martin, was friends with Gene. I don't know how they knew each other, but I remember going to the Powers house with my parents, Byron and Catherine, and playing with the kids, and having them come to our house occasionally. Good memories from a long time ago. My thoughts and prayers for the family.
Cathy Martin McCord
Comment Share
Share via:
QK

Posted Mar 09, 2021 at 07:12pm
It breaks my heart to hear of Gene's passing. He was the most amazing man I've ever known. I will always remember all my memories growing up with him in my life. From seeing pictures of him hold me as a baby to watching hold my 1St born. The Coffey family sends out our prayers to his family and friends. Til we see you again my dear friend.
Comment Share
Share via:

Posted Mar 09, 2021 at 05:47pm
Powers Family,
I am saddened to hear of Gene's passing. He meant a lot to the community of Reinmiller and to me personally. I have known him so many years and he was a great man. My families thoughts and prayers are with you all at this time. 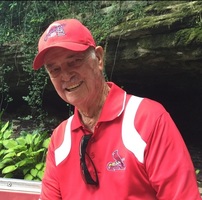