To share your memory on the wall of Betty Patton, sign in using one of the following options:

Betty had a very intriguing life and many exciting journeys.

In 1945, Betty’s unwavering love for the Lord led her to the Cincinnati Bible Seminary, known today as the Cincinnati Christian University, where she obtained a Bachelor’s of Arts degree, with honors, on May 19, 1949. While attending college, Betty was also inducted into the Delta Tau Honor Society.

In October 1949 at the age of 25, Betty’s passion for serving the Lord led her to mission on the Yakama Indian reservation in Washington state. She taught from the tribe’s bible with only 99 words in their language. In 1951, Betty assisted the Larson family to establish a church for the Flathead Tribe in St. Ignatius, Montana. The ministry started in a garage where Betty taught the word of the Lord to the children.

When Betty was on furlough in 1951, she met James Andrew Patton at a yearly bible college meeting in Cincinnati, Ohio. They would meet at the bottom of a hill at a cemetery to talk. When Betty returned to the Indian reservation, they stayed in touch by writing letters back and forth. In August 1952, Betty returned to Cincinnati where she re-enrolled in graduate school with Andrew and their love for one another grew.

On December 20, 1952, Andrew and Betty married in Piqua, Ohio, in a hometown Church of Christ. Together they made a brave decision to become missionaries in Japan and left on that mission in August 1953 where they would teach the Lord’s word for 40 years before returning to the United States. During their mission in Japan, Andrew became the President of the Tokyo Bible Seminary. He and Betty would bear four beautiful children, open five new churches, manage the Shinshu Christian Camp, and minister in Yokosuka on the 7th fleet Naval base where they baptized several servicemen and women. Betty would often have 40-50 missionaries traveling through to another country and Christians visiting Japan. She was always a gracious host and a fantastic cook.

Even when Andrew and Betty returned to the U.S., their mission did not cease. They were members of and held positions at Iron Gates Christian Church, they supported the Larson Family at Pinehaven Christian Youth Home in St. Ignatius, Montana, Show-Me Christian Youth Home in Missouri, and Betty volunteered for 28 years at Spring River Christian Village where she was Treasurer of the Auxiliary until she was 93 and could no longer drive. Betty was also a member of the Carl Junction Christian Church.

Betty’s children have many fond memories of their mother, often calling her “General Patton” as she was always in charge of the household. Her passion for Sumo wrestling, Ohio State football, Duke University basketball and the St Louis Cardinals never wavered. There was never a time when venturing to her house that she did not have one of these sports on TV.

Due to our current situation with Covid, we will not have a funeral or visitation at this time. We will schedule a celebration of life at a future date.

In lieu of flowers, donations to the Pinehaven Christian Children’s Ranch or the Show-Me Christian Youth Home would warm our mother’s heart.
Read Less

To send flowers to the family or plant a tree in memory of Betty Jean Patton (Armstrong), please visit our Heartfelt Sympathies Store.

There are no events scheduled. You can still show your support by sending flowers directly to the family, or planting a memorial tree in memory of Betty Jean Patton (Armstrong).
Visit the Heartfelt Sympathies Store

We encourage you to share your most beloved memories of Betty here, so that the family and other loved ones can always see it. You can upload cherished photographs, or share your favorite stories, and can even comment on those shared by others.

Posted Feb 24, 2021 at 05:48pm
When I would volunteer at Spring River, Betty worked in the gift shop. I loved being around Betty. She was upbeat, a very caring person and I enjoyed talking with her very much. When Betty talked about loading her little kids on a boat and moved to Japan- I was in awe of how brave she was. I was very saddened when Betty didn’t come to the gift shop any longer, I missed seeing her. My condolences to all of Betty’s family. In a short period of time she became one of my favorite people. I know Betty’s family will miss her very much.
Comment Share
Share via:
R 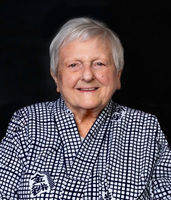