To share your memory on the wall of George Leishing, sign in using one of the following options:

He was born April 6, 1943 in Springfield, Missouri to Floyd and Donna (England) Leishing.

He was born April 6, 1943 in Springfield, Missouri to Floyd and Donna (England) Leishing.

George was a minister for Tarkio Full Gospel Church and the music minister for several area churches. He also worked in HVAC for Cardinal Scales and for himself. He served as a Military Policeman in the United States Army with service in Korea and West Point. He was a former member of the American Legion. George was the founder and former president of the Joplin chapter of Christian Motorcycle Association. He was a member of Cornerstone Revival Church.

George was preceded in death by his parents, two brothers and one sister.

To send flowers to the family or plant a tree in memory of George Lee Leishing, please visit our Heartfelt Sympathies Store.

Love, Alicia and Rich Armstrong, Amanda and Joe McDaniel, and other have sent flowers to the family of George Lee Leishing.
Show you care by sending flowers

Amanda and Joe McDaniel purchased flowers and planted a memorial tree for the family of George Leishing. Send Flowers

Posted Feb 24, 2021 at 06:24am
Your Daddy was always such an inspiration to me. I am sure he probably sang his way into heaven. Love you all so much. 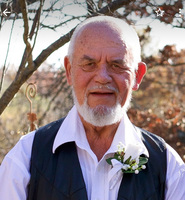