To share your memory on the wall of Samuel Casavecchia, sign in using one of the following options:

Samuel (“Sammy” to his family and “Sam” to his friends) was born on August 6, 1945 in Loup, Nebraska to Samuel Casavecchia an... Read More
Samuel Silvio Casavecchia, age 75, of Carl Junction, passed away January 17, 2021 at Freeman Hospital.

Samuel (“Sammy” to his family and “Sam” to his friends) was born on August 6, 1945 in Loup, Nebraska to Samuel Casavecchia and Agnes Tyma.

Sam married Sandy Turley in 1984. To this union he was blessed with 3 step-daughters; Larreta Divis (Joe) of St. Louis, MO, Christa Sherman (Jeff) of Drexel, MO and Mindy Maples of Joplin, MO. Also surviving are his sisters Mary Ann Palu of San Antonio, TX, Joyce Popham of Waco, TX, Angie Casavecchia (Steve Reed) of Carl Junction, MO and Emily DeFranco (Jeff LeRoy) of Cincinnati, OH and a brother Skip Wilson (Melissa) of Cincinnati, OH, many nieces, nephews and grandchildren. He was preceded in death by his parents.

A memorial service has been scheduled for 2:00 p.m. on Friday, January 29, 2021 at Mason-Woodard Mortuary. Family will receive friends during a time of visitation immediately following the service.

To send flowers to the family or plant a tree in memory of Samuel Silvio Casavecchia, please visit our Heartfelt Sympathies Store.

We encourage you to share your most beloved memories of Samuel here, so that the family and other loved ones can always see it. You can upload cherished photographs, or share your favorite stories, and can even comment on those shared by others.

Posted Jan 28, 2021 at 05:47pm
Sam was one of the first people who I met after moving to Joplin. He was at the gas station every morning. Helped me fill my tank or wash my windows. He even came to my house a time or two to help with other projects. He was a very nice man and the world was a better place because he was in it. Rest in Peace Sam!
Saying prayers of comfort for his family
Comment Share
Share via:
CG

Craig, Ann and the girls. 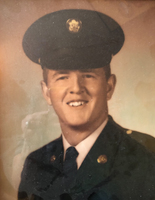