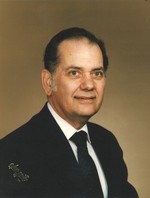 Reverend Robert Louis Hendrix Sr., 89, of Grove, Oklahoma, went to be with his Lord and Savior on Wednesday, November 25, 2020 at his home in Grove. He died of natural causes.

Reverend Hendrix was fond of fellowshipping with anyone claiming Christ as their Savior. He was a third generation ordained Church of God (Anderson, IN) minister. He also enjoyed playing ping-pong and listening to Christian music, preferable Southern Gospel, and would occasionally sing in choirs at the churches he attended over the years. He was a mentor to many younger pastors and considered a father figure to many people. He was known for his humility, compassion, his love for the Lord, the church, and his family. He was a loyal and trustworthy friend to many.

In lieu of flowers, contributions may be made to Mary Lou Hendrix and the Hendrix Family in care of the mortuary.

Services will be held at 10:00 a.m. Tuesday, December 1, 2020 at the Mason-Woodard Chapel. Burial will follow at Stone Cemetery near Diamond, MO. The family will receive friends during a time of visitation from 6 to 7 Monday evening at the funeral home. Pallbearers will be grandsons Shane Kissel, Matt Kissel, B.J. Oxendine, Cody Kidd, Tyler Kidd, and Don Kidd. Honorary pallbearers, Gene Davison, Donald Loop, and John Johnson.

Mason-Woodard Mortuary requests anyone in attendance of any services or visitations adhere to the mask ordinance passed by the City of Joplin and observe social distancing practices.