To share your memory on the wall of Ross Lovell, sign in using one of the following options:

Ross was born on June 3, 1945 in Joplin, Mo., the son of the late Cleo and Latic... Read More
Ross Alan Lovell, age 75, of Galena, Ks., passed away on Monday November 23, 2020, at Belton Regional Medical Center, suddenly due to heart complications.

Ross was born on June 3, 1945 in Joplin, Mo., the son of the late Cleo and Laticia (Ross) Lovell. He married Shirley Walters on September 12, 1970 in Joplin, together they raised two daughters. He graduated from Columbus High School. Ross served three tours during the Vietnam war in the United States Navy. In 1982, he enlisted in the Army National Guard and remained active until his retirement in 2001. He worked as a maintenance mechanic at Able Body Manufacturing and retired in 2010.

The family will receive friends 1-2 p.m. Sunday at the mortuary. Memorial contributions may be given to the American Heart Association or to the National Kidney Foundation in care of the mortuary.

To send flowers to the family or plant a tree in memory of Ross Alan Lovell, please visit our Heartfelt Sympathies Store.

We encourage you to share your most beloved memories of Ross here, so that the family and other loved ones can always see it. You can upload cherished photographs, or share your favorite stories, and can even comment on those shared by others.

Posted Nov 28, 2020 at 08:47am
Susan and Kenny: So sorry for your loss. God bless you and your family. With love and admiration, Steve and Penny DeHart

Flowers were purchased for the family of Ross Lovell. Send Flowers

Posted Nov 25, 2020 at 07:30pm
Ross is one of those you can truly be called a nice guy. Caring, generous and kind. It was a genuine pleasure to get to know him. He will be missed and all our best wishes to his loved ones.
Comment Share
Share via: 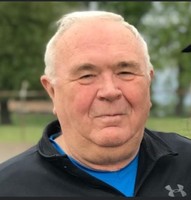