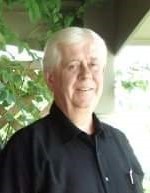 Larry was born on June 8, 1939 in Great Bend, KS, the son of Theodore Karst and Helen (Boyle) Karst. Larry proudly served his county as part of the United States Army. Following his service, he worked in sales for a short time. He received his Bachelor of Science Degree at Pittsburg State University. He received his Master of Science Degree at Emporia State University. Larry served as a High School instructor in Topeka, KS, before moving to Joplin in 1968. He became a college counselor and veterans coordinator. He taught a myriad of college courses. He retired his teaching career in 1999 as an Associate Professor at Missouri Southern State University in Joplin. He was of the Methodist faith.

He married Nancy Shobe on February 14, 1960, they were happily married for sixty years, she survives. Additional survivors include one daughter, Laurie Kay Olson, of Joplin; grandchildren Amber Karst and James Olson Jr. and his wife, Megan; one brother, Don Karst, and his wife, Pat, of Columbia, MO.

He was a member of Elks Local 501, Joplin, MO. He enjoyed scuba diving, billiards, shooting sports and fishing.

Arrangements have been entrusted to the Mason-Woodard Mortuary & Crematory.