To share your memory on the wall of Bobby Brown, sign in using one of the following options:

Bobby was born on June 21, 1949 in Neosho, MO to Orville and Joan (Ness) Brown. Bobby was a lifetime Joplin resident.

Bobby was born on June 21, 1949 in Neosho, MO to Orville and Joan (Ness) Brown. Bobby was a lifetime Joplin resident.

On May 23, 1998 Bobby was united in Marriage to Cheryl Thomas Fager in Eureka Springs, Arkansas.
Prior to this union, he was married to Debbie Hamm and had two daughters. He later married Barbara Reed and had another daughter.

Bobby was a loving husband and father. He never met a person that he could not get along with. He was always laughing, had a smile on his face, and had a story to tell. He enjoyed hunting, fishing, RC planes and ham radio. He loved his kids, grandkids, family and friends with all his heart. He completed his bachelor’s degree at MSSU and Master’s and EDS degree at Pittsburg State University. Bobby was a school psychologist employed by SEK Interlocal-Pittsburg, KS and retired after 39 years of service. In addition, Bobby was retired from the Kansas National Guard combat engineer unit after 23 years of service.

Bobby was preceded in death by his parents. He is survived by his loving wife Cheryl of twenty one years. Three daughters, Sarah Moore and husband Brett, Tressi Brown and partner Brian, and Emily Lowe and husband Brennan. Two stepdaughters, Charisse Holt and husband Mark and Erin Boyd and husband James. Ten grandchildren; Alyx, Lakin, Maddy, Abby, Jaxson, Bennett, Reagan, Carter, Keith, and Owen. He is survived by sister, Marsha Kroymann and husband Kraig, brother Don Brown and proceeded in death by his brother Jack Brown. He also leaves behind countless family and friends, which he loved dearly. In addition, he leaves behind his two fur babies Jazzy and Bella, which he enjoyed spoiling rotten. Bobby will be greatly missed by all his family and friends.

Arrangements are under the care and direction of Mason-Woodard Mortuary and Crematory in Joplin, Missouri.
Read Less

To send flowers to the family or plant a tree in memory of Bobby Brown, please visit our Heartfelt Sympathies Store.

There are no events scheduled. You can still show your support by sending flowers directly to the family, or planting a memorial tree in memory of Bobby Brown.
Visit the Heartfelt Sympathies Store

We encourage you to share your most beloved memories of Bobby here, so that the family and other loved ones can always see it. You can upload cherished photographs, or share your favorite stories, and can even comment on those shared by others.

Posted May 03, 2020 at 04:56pm
With warmest memories of Bobby Lee. We are thinking of you. The Edmund V Ness family. Virginia, Chris -Anne Melissa and Mark

Thank you so much for the lovely memorial.
KK

Posted May 01, 2020 at 05:14pm
I worked with Bob for many years at the middle school in Pittsburg. He was the best school psychologist we ever could have hoped to have st our school! He was a professional and always followed through for the teachers and families he worked with. I loved his sense of humor especially—-he always had a smile and funny story to share! He was just the BEST!!! We loved him!! Kerry Merrell-Kubler
Comment Share
Share via:
C

Thank you so much for the wonderful memories you shared. 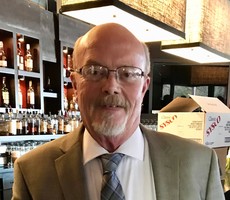