To share your memory on the wall of Robert Shaw, sign in using one of the following options:

Provide comfort for the family of Robert Shaw with a meaningful gesture of sympathy.

Robert was born on June 21, 1955 in Ceres, Ca. the son of Vance and Bonnie (Brandon) Shaw. He has been a long-time area resident. Before moving to the area, Robert resided in California. Where he worked as an HVAC mechanic for Thorsons in Turlock, Ca.

Robert is to be taken for cremation with the family holding a Memorial Service at a later date.

To send flowers to the family or plant a tree in memory of Robert Shaw, please visit our Heartfelt Sympathies Store.

There are no events scheduled. You can still show your support by sending flowers directly to the family, or planting a memorial tree in memory of Robert Shaw.
Visit the Heartfelt Sympathies Store

Corey Stansill sent flowers to the family of Robert Shaw.
Show you care by sending flowers 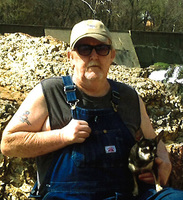