To share your memory on the wall of Michael Crumbliss, sign in using one of the following options:

Provide comfort for the family of Michael Crumbliss with a meaningful gesture of sympathy.

Print
Michael James Crumbliss opened his eyes to a new home on Tuesday where he was to be greeted by his mother Peggy Cross Crumbliss, father James Junior Crumbliss, brother Patrick Wayne Crumbliss, and other loved ones inside the gates of Heaven.

Michael James Crumbliss opened his eyes to a new home on Tuesday where he was to be greeted by his mother Peggy Cross Crumbliss, father James Junior Crumbliss, brother Patrick Wayne Crumbliss, and other loved ones inside the gates of Heaven.

Mike, the father to children Jennifer Thomas (Wayne Neal) of Duenweg and Adam Crumbliss (Angie Giddings) of Columbia, had resided in Joplin for most of his life.

He treasured most his opportunities to laugh with and love his grandchildren, Joe Thomas, Jared Neal, Katelyn Neal, Emily Crumbliss, Caroline Crumbliss, and great-granddaughter Kaiya Rae Thomas. In his passing he leaves behind numerous cousins, nieces, nephews, and other loved ones.

Mike lived an enriched life marked by service to his community, laughter, and a hunger to share experiences with others. Crumbliss was involved with various service and charitable organizations including receiving his Eagle Scout Award from Boy Scouts of America. He was a 1965 graduate of Joplin High School. Throughout his life he had been active in the American Heart Association, Joplin Jaycees, Ozark Little League, the Joplin Traffic Commission, and others. In later years, he served as Chairman for both the Joplin Metro Credit Union and the Missouri Motor Carriers Association.

Mike was a fan of the Beatles and all things Disney. He attended college at Pittsburg State and received his B.S. degree from Missouri Southern State College. He worked for various companies throughout his life, spending his largest tenures at Tri-State Motor Transit and Leggett & Platt in their transportation division.

In accordance with Mike’s wishes, his remains are to be cremated and buried at Stone Cemetery in Jasper County in a private family service. In lieu of flowers, Mike requested that donations be directed to the Joplin Schools Foundation or to charities of the donor’s choice.

Arrangements are under the care and direction of Mason-Woodard Mortuary and Crematory in Joplin, Missouri.
Read Less

To send flowers to the family or plant a tree in memory of Michael James Crumbliss, please visit our Heartfelt Sympathies Store.

Posted Apr 07, 2020 at 04:40pm
Carol & Family,
My sincere condolences on Mike's passing. What a truly nice person that I had the opportunity to know.
Sid Hiatt
sidhiatt@yahoo.com
Comment Share
Share via:
JG

Posted Apr 06, 2020 at 03:05pm
I remember Mike from the "Blast from the Past'", that took part for well over 20 years. Him and I were dancing partners for the song "Footloose" one year, and he had some moves....Lol He was always very kind and thoughtful, and wherever he was in the room while practicing for the "Blast", it was clear that he was a devoted family man. My mother, Judy Marcum and I always had a great time visiting and practicing with him. Many prayers to the family. RIP Mike
Comment Share
Share via:
JH

Posted Apr 06, 2020 at 02:28pm
Carole, Jennifer, Adam and families,
I am praying for you today and in the months to come. I was blessed to have Mike as a brother. We are lucky to have so many wonderful memories of him. May God comfort you during this difficult time.
I love you
Jane
Comment Share
Share via:
BB

There are far too many memories to share just one. Think pink sweater sledding...

Mike was a wonderful brother- in-law. He was truly our brother. May the Lord wrap his loving arms around all of you and comfort you as only he can. I love you and I am with you.❤️
I know the angels are rejoicing.
Becky
Comment Share
Share via:
MD

Posted Apr 05, 2020 at 11:05am
Mike brought a joyful presence to family get togethers. I will always remember the twinkle in his eyes as he told us funny stories. He had a wonderful sense of humor and kind way of including everyone. 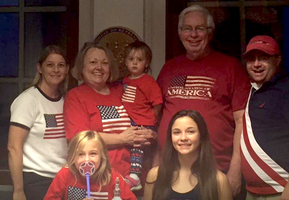