To share your memory on the wall of Tommy Miller, sign in using one of the following options:

Mr. Miller, son of the late Dave Harlin and Garnet (Hollan) Miller, was born on March 5, 1941 in Stafford, AZ. After High school he served his country honorably in the United States Navy. On January 13, 1979 he was united in marriage to Rayma Leggitt, in Carthage. He was employed as a welder most of his life working in various locations in Oklahoma in the oil refinery business. He was very proud of his Native American Cherokee heritage and enjoyed learning about the history of the Cherokee people.

Memorial services with full military honors will be held on Monday, March 16, 2020 at 2:00 pm at the Mason-Woodard Mortuary in Joplin with visitation to follow. Memorial contributions may be made to St. Jude’s Children’s Hospital and may be entrusted to the mortuary.

To send flowers to the family or plant a tree in memory of Tommy C. Miller, please visit our Heartfelt Sympathies Store.

We encourage you to share your most beloved memories of Tommy here, so that the family and other loved ones can always see it. You can upload cherished photographs, or share your favorite stories, and can even comment on those shared by others. 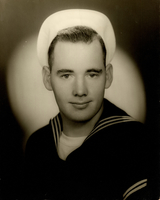