To share your memory on the wall of Henry Coursey, sign in using one of the following options:

Henry was born November 7, 1918, in Retreat Park, CO, the son of the late Edward Norman Coursey and ... Read More
Henry W. Coursey, age 101, of Joplin, passed away on Sunday, January 19, 2020, at Joplin Gardens, following a long and fulfilling life.

Henry was born November 7, 1918, in Retreat Park, CO, the son of the late Edward Norman Coursey and Odie Ethel (Drumright) Coursey. He married Betty Ruth Marlow on June 1, 1941, in Denver, CO. Together they were blessed with seventy-five years of marriage and six children. He served in the United States Army and was a veteran of WWII. From July 16, 1942 to July 8, 1944, he served as a general clerk and packing case maker. Throughout his career, he worked as a factory worker for Kuner’s and Great Western Sugar Factory in Brighton, CO. Later, he was a milk truck driver for Anderson Dairy and a gas truck driver for Putnam Oil Company. He operated the Carter Gas Station and owned and operated Coursey’s Cleaners, both in Ft. Lupton, Co. After moving to Missouri in 1971, he raised cattle and worked as an electrician for Aten Electric in Bella Vista, AR. He was a longtime member of the I.O.O.F. Lodge, and he enjoyed playing the guitar, the fiddle, the harmonica, and the piano.

To send flowers to the family or plant a tree in memory of Henry W. Coursey, please visit our Heartfelt Sympathies Store.

We encourage you to share your most beloved memories of Henry here, so that the family and other loved ones can always see it. You can upload cherished photographs, or share your favorite stories, and can even comment on those shared by others.

Posted Jan 25, 2020 at 03:47pm
Love reading about someone like Henry that lived a full life and over a hundred years. All the family. We never know what is going to happen after we say I Do! A man of much music and from the great state of Colorado, which is so much like Heaven, almost! When God welcomes Henry into His Forever Heaven, that he made for everyone who will love on His son Jesus, his life will only be beginning. Looking forever young and a place of his own with his hearts desire in every nook and cranny. Heaven is so big, it would take forever and a day to cover it all. Earth is just a little speck in comparison. Henry welcome home! Enjoy the peace and love, where everything is perfect. If we could only see Henry now! Save a place for us Henry! Thank You Jesus for making all of this possible!
Comment Share
Share via: 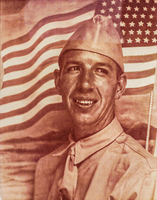