To share your memory on the wall of Leta Sowersby, sign in using one of the following options:

Print
Leta Bernece Sowersby, age 86, of Joplin, passed away on December 22, 2019 at the Spring River Christian Village in Joplin.

Leta was born on July 7, 1933 in Joplin, the daughter of the late Wilmer and Veva (Drake) Lawson. She has been... Read More
Leta Bernece Sowersby, age 86, of Joplin, passed away on December 22, 2019 at the Spring River Christian Village in Joplin.

Leta was born on July 7, 1933 in Joplin, the daughter of the late Wilmer and Veva (Drake) Lawson. She has been a lifetime area resident. She was a graduate of Joplin High School Class of 1951. She was united in marriage to Tim Leroy Sowersby on February 14, 1953 in Joplin. Together they raised four children. In her early years she worked as a meat packer. She then worked for Fraley Funeral Supply, Safeway Bakery, and as a cake decorator for Wal-Mart in Neosho, MO. From 1977 to 1987 she and her husband owned and operated Powell General Store in Powell, MO. She was a member of Fairview Baptist Church.

Survivors include one son, Tim Sowersby, Joplin; two daughters, Krystal Jones, and her husband, Jim, of Carl Junction, and Vicki Roark, of Seneca; one sister, Lera Dill, Joplin; a brother-in-law, Jim Campbell; 9 grandchildren; 16+ great-grandchildren, and 2 great-great-grandchildren. In addition to her parents, she was preceded in death by a daughter, Karla Jones in June of 2013, a granddaughter, Misha Roark; and a sister, Lois Campbell.

Funeral services will be 10:00 a.m. Friday at Mason-Woodard Chapel. Reverend Bob Simon and Reverend John Mitchell will officiate. Burial will be in Hornet Cemetery. The pallbearers will be her grandsons.

The visitation will be 7-8:00 p.m. Thursday at Mason-Woodard. Memorial contributions may be given to Fairview Baptist Church in care of the mortuary.
Read Less

To send flowers to the family or plant a tree in memory of Leta B. Sowersby, please visit our Heartfelt Sympathies Store.

We encourage you to share your most beloved memories of Leta here, so that the family and other loved ones can always see it. You can upload cherished photographs, or share your favorite stories, and can even comment on those shared by others.

C&H Heating and Air sent flowers to the family of Leta B. Sowersby.
Show you care by sending flowers

Posted Dec 24, 2019 at 09:25pm
Leta was a special sister to me. I also had another special sister, Lois. Just us 3 girls raised together with wonderful parents who taught us love and respect and to trust our lives to Jesus very early. I will always remember my sister's kindness to me. Leta loved her family very much, and her church, Fairview Baptist. Until we meet again, my love, Lera
Comment Share
Share via:
CA

Posted Dec 24, 2019 at 03:35pm
Please accept our most heartfelt sympathies for your lossour thoughts are with you and your family during this difficult time. 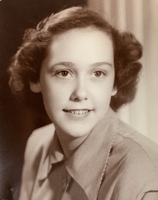