To share your memory on the wall of Lawrence "Larry" Stewart, sign in using one of the following options:

Provide comfort for the family of Lawrence "Larry" Stewart with a meaningful gesture of sympathy.

Larry was born on August 20, 1942 in Whittier, California to the late Billy Stewart and Alpha (Syble) Gunn. Larry was a Godly man. He was a member of the Fairview Christian Church in Carthage. In earlier years, he directed the children’s church program at Forest Park, Joplin. Larry found great joy teaching children the Word of God. Larry worked for Gulf States, which became Rock Tenn, in Joplin. There he was part of production management until his retirement.

Funeral services will be held Saturday June 29, 2019 at 10:00 am at the Chapel at Mason-Woodard Mortuary with burial to follow at Ozark Cemetery in Joplin. The family will receive friends from 6-7pm Friday at the mortuary.
Read Less

We encourage you to share your most beloved memories of Lawrence "Larry" here, so that the family and other loved ones can always see it. You can upload cherished photographs, or share your favorite stories, and can even comment on those shared by others.

Flowers were purchased for the family of Lawrence "Larry" Stewart. Send Flowers 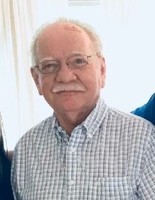