Provide comfort for the family of Mary Post with a meaningful gesture of sympathy.

On April 8, 1928, Mary was born to Dr. Charles and Geraldine, (Visser), Katherman in Sioux City, Iowa. She graduated from Central High School in 1945. Mary attended Mills College in Oakland, California and in 1949 graduated from the University of Kansas with a Bachelor of Science degree. Mary married the love of her life, Neal Alfred Post, on September 16, 1950 and they celebrated their 55th wedding anniversary in 2005. They had three children Kathryn J. Wright (Kathy), Deborah J. Humes (Debbie) and Neal Alfred Post III (Corky). During Mary and Neal’s life together, they lived in Lawrence, Kansas; Orange, California; Mesa, Arizona; and Sioux City, Iowa.

Where ever the couple resided during their life together, Mary devoted herself to her church, her students, her community, her friends and to her family. She had a heart for giving. She was an active member of both First Presbyterian Church in Orange, California and in Sioux City, Iowa. Not only was Mary an active church member, she gave of her time and talent to numerous philanthropic organizations such as the Boys and Girls Club, Assistance League, the YWCA, March of Dimes, and P.E.O. Mary Post was also an outstanding English teacher in Kansas, California, and Iowa for over 24 years.

In 2005, Mary’s husband Neal passed away and in 2015, Mary decided to leave her home of many years in Sioux City, Iowa and move to Joplin, Missouri to be closer to her eldest daughter, Kathy Wright. At the age of 87, Mary became active in the Joplin Area Welcome Club, First United Methodist Church, and she reached the 70 year membership milestone with P.E.O. in chapter FI.

In addition to her husband, Neal, Mary was preceded in death by her parents, a sister, Barbara Smith, her brother-in-law, Wrede H. Smith, her sister-in-law, Caroline V. Katherman and her son-in-law, Stephen Wright.

The family will hold a memorial service on Monday, April 29, 2019 at 10:30 am at the First United Methodist Church in Joplin, with Pastor Marcia West Eichler officiating. Immediately following the service, there will be a Celebration of Life reception at The Villas at the Plaza, 1817 Rex Avenue, Joplin, Missouri. Memorial donations may be made to the First United Methodist Church of Joplin’s Music Department or the American Cancer Society.

Cremation arrangements are under the care and direction of Mason-Woodard Mortuary, Joplin.
Read Less

We encourage you to share your most beloved memories of Mary here, so that the family and other loved ones can always see it. You can upload cherished photographs, or share your favorite stories, and can even comment on those shared by others. 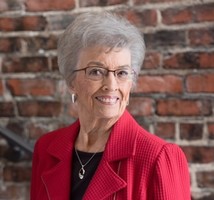