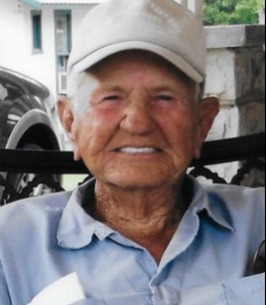 Robert was born on October 2, 1931 in Clarksville, Tn. Robert served his country as part of the U.S. Army, following his service, Robert moved to the area from Westminster, Ca. in 1969. He worked for Stanley & Rusk Plumbing for many years before retiring in 1988. He was a lifetime member of the Local 178 Plumbers and Pipefitters Union.

He married Martha Sue Ledbetter in 1951, they divorced in 1978, she preceded him in death in 1990. Robert then married Marie Gregory Bell on July 16, 1985, she survives. Additional survivors include one son, Mark Rich of Grove, Ok.; two step-sons, Duane Bell of Bull Shoals, Ar., Jamie Bell of Joplin; one step-daughter, Patty Tate of Bull Shoals, Ar.; one sister, Bessie Lou Parker of Clarksville, Tn.; ten grandchildren and several great-grandchildren. He was preceded in death by his son Mike Rich.

The family will receive friends during a time of visitation from 5 – 6 p.m. Monday.

To send flowers to the family of Robert Rich, please visit our Heartfelt Sympathies Store.

We encourage you to share any memorable photos or stories about Robert. All tributes placed on and purchased through this memorial website will remain on in perpetuity for future generations.

Provide comfort for the family of Robert Rich by sending flowers.
Send Flowers

JO
My condolences for the family.
Bob will be missed by many.
RIP Bob.
Jeff Owen - Thursday October 25, 2018 via Condolence Message
Share This:
1
Page 1 of 1
Share
×

Thank you for sharing!

Provide comfort for the family by sending flowers.

Or use your email:

Provide comfort for the family by sending flowers.

Connect with families at their time of loss. By subscribing to email updates, you will receive two daily updates containing all new stories, photos, candle lightings, condolences, and more.