In Memory of
Joseph Warren
Sisseck
1939 - 2018
Click above to light a memorial candle.
This Book of Memories memorial website allows family and friends a place to re-visit, share and enhance this tribute for future generations.
Open Full Navigation
Close
Menu
Click here to
Send
Flowers 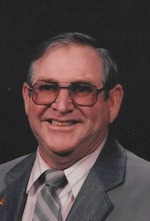 It is with great sadness that the family of Joseph (“Joe”) Warren Sisseck announces his passing as a result of Alzheimer’s on Friday, September 7, 2018, at the age of 78.

Joe was born on November 3, 1939 in Oronogo, MO, the second born son of the late George and Margaret (McWilliams) Sisseck. He graduated from Carl Junction High School in 1957 and married the love of his life, Martha Ann Coffman on October 4, 1958. They lived and raised 4 girls in the Oronogo area and attended Christ’s Church in Oronogo during that time, where Joe served as a deacon. Joe was involved in Radio Emergency Affliated Communication Team (REACT) and was an active ham radio operator for several years. He worked for the Missouri Department of Transportation for over 38 years before injury forced him to retire in 1993. He and Martha moved around a lot in their later years as he enjoyed rehabilitating and renovating homes in his retirement. Joe was a member of Diamond Christian Church at the time of his death.

The family would like to thank the staff at Oak Pointe Assisted Living and Memory Care and Hospice Compassus in Monett, MO for caring for Joe during his final days and their kind and loving support of the family during this difficult time.

Funeral services have been scheduled for 10:00 a.m. Wednesday, September 12, 2018 at the Mason-Woodard Chapel. Burial will follow at Nashville Cemetery in Nashville, Mo. The family will receive friends during a time of visitation at the funeral home from 6 to 7 p.m. Tuesday evening.

To send flowers to the family of Joseph Warren Sisseck, please visit our Heartfelt Sympathies Store.