In Memory of
George Walter
Lawrence
1940 - 2018
Click above to light a memorial candle.
This Book of Memories memorial website allows family and friends a place to re-visit, share and enhance this tribute for future generations.
Open Full Navigation
Close
Menu
Click here to
Send
Flowers 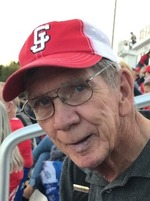 George Walter Lawrence, age 77 of Carl Junction, Mo., passed away on Saturday August 4, 2018, at his home surrounded by his family, following a long courageous battle with Parkinson’s Disease.

George was born on December 18, 1940 in Smithfield, Mo., the son of the late Claude and Grace (McCumber) Lawrence. He graduated in 1958 from Carl Junction High School. He married Linda Kay Hopper on December 2, 1960 and together they had three daughters. He worked for Sperry Vickers until the plant closed in 1987. He then went into business for himself doing home repairs and building new homes. He later retired from building and started a lawn care service which he did until his health prevented.

He was a founding member of the Fir Road Christian Church where he enjoyed serving by teaching Sunday School and doing building maintenance. He enjoyed fishing, hanging out in the local coffee shop, lunch at Randy’s, and watching his grandchildren’s activities.

To send flowers to the family or plant a tree in memory of George Walter Lawrence, please visit our Heartfelt Sympathies Store.